Moving 13,933 kilometers away from home may be intimidating to some, but not for Alex Cuthbert.

Born and raised in Pennsylvania, Alex spent his childhood playing an array of sports — from soccer to squash — and teaching himself photography. But it was his aptitude for math and design that would influence the trajectory of his future career. At just sixteen years old, Alex was coding replicas of his favorite video games. “I found gratification from being able to create things that were interactive and get instant results from my work,” he explains, “It was like magic.”

Alex was always interested in exploring the edge of what was possible. He recalls, “My parent’s friends would tell me about their hometowns in France, New Zealand, and Turkey, and I remember growing more interested in other cultures and belief systems,” he recounts, “I’ve wanted to travel and work internationally from early on.”

Subsequently, he attained a Bachelor’s degree in Computer Science (CS) and Spanish from Dartmouth University, and later a Ph.D. in Human-Computer Interaction from the University of California, Berkeley. After graduation, he kickstarted his career in design within a technology industry evolving from personal computing to the Internet, social media, and mobile technology.

A career in People, Design, and Technology

For the first ten years of his career, Alex worked as a technology manager and engineer designing UNIX systems compilers, visual graphics toolkits, and early-stage collaborative technologies which became the underpinnings for innovations now driving collaborative tools such as Figma, Slack, Zoom, and Miro.

He frequently interfaced with scientists at companies like NASA, Boeing, Sun Microsystems, and Silicon Graphics. “Anything that connected people, design, and technology was what I was building in the early years,” he describes. The breadth and depth of the projects he undertook inevitably brought him from working in the Bay Area to Shanghai, Tokyo, Armenia, and as fate would have it, Indonesia.

An intrigue with Indonesia

So, by the time Abhinit Tiwari, Gojek’s Head of Design at the time, reached out about an opportunity, Alex was all game.

In fact, Indonesia had already been on his mind since he first visited Bali twenty years ago. He notes,

“I’ve worked with a lot of different people within a lot of different cultures, but I really resonated with the humility and collaborative spirit Indonesian people exhibit, and the speed of technology and cultural evolution happening here. The way technology is evolving in Southeast Asia is outpacing what’s happening in the US, similar to the high adoption and growth that we saw in China ten years ago.”

This rapid technological transformation is occurring in parallel with Gojek’s shift from a SuperApp to a hyperlocal, on-demand service that integrates products, services, and experiences. “This makes for an incredibly invigorating environment to work in, especially since design plays a critical role in connecting the pieces across separated business functions and product areas. We’re just at the tip of the iceberg and I wanted to be part of this evolution,” Alex maintains.

As he had expected, it was a straightforward move. “I’ve traveled around Indonesia before, so I didn’t experience a big culture shock,” Alex reveals. Along with having a large network of friends in Indonesia, some other aspects that have eased his transition have been learning Bahasa Indonesia, surfing, and going on runs around his neighborhood before work each day.

Taking up the Gojek design mantle

As of November 2020, Alex has been Gojek’s Head of Design. In collaboration with GoPay, GoTo Financial, and Tokopedia, he oversees a team of over a hundred designers — from motion, illustration, to UX design — who collectively build all of Gojek’s services for consumers, partners, and businesses. Most notably, the Design team is responsible for the customer experience for our consumers, merchant partners, and driver partners. Alex also holds a leadership role across the GoTo Group defining the brand essence of Gojek as well as the strategic differentiators for the product experience in global markets.

A cornerstone of all of Gojek’s offerings is ensuring our products and services are as accessible to as many people as possible. Alex explains, “Given Indonesia’s huge span of cultures and people, we have a responsibility to include their different abilities and needs and consider how our technology fits into their lives. How do we enable communication between a deaf driver-partner and their passengers, or between people who don’t speak the same dialect? How do we permit a vast number of unbanked people to use Gojek and accumulate savings? It’s a rare opportunity to think about how we can best serve our community versus just creating a tool. Good design means good business.”

To Alex, Gojek is a company of great optimism, impact, and opportunity:

“I joined Gojek because I always seek out people, companies, and situations that let me amplify my creative vision, not just for delightful experiences, but for transformative and world-changing innovations.”

He points out how Gojek’s ethos is heavily grounded in the Indonesian cultural facet of “Gotong Royong,” or “communal action” to better one’s community, which he believes comes directly from the senior leadership of Gojek and Tokopedia. “I find this remarkably different from how Silicon Valley leaders present themselves, their goals, and their companies. It’s refreshing and goes to the core values and purpose behind the GoTo Group and the people running it.”

Moreover, Alex regards being part of Indonesia’s largest digital ecosystem as a unique opportunity to tackle uncharted problem sets unavailable anywhere else in the world. “I joke to people and say that I work for a motorcycle delivery company that’s a mix between Uber, PayPal, and Amazon. The synergy of those core pieces has magic in it, and we’re exploring what it means for these pieces to seamlessly interweave.”

The meaning of the move

Relocating to a brand new country has its challenges, but Alex believes it has benefitted him in both his growth as a leader and a designer. Not only does gaining a deeper cultural awareness lead to greater self-reflection and a more nuanced worldview, but it’s also a vital skill in designing meaningful products.

“As everything is moving global right now, understanding the way people use technology, their values, how they interact with music, sports, fashion… these are all pieces critical to building products that people love,” he conveys.

He also posits that Gojek and GoTo have the potential to bring Indonesian values to a global audience, “This cultural embeddedness defines what I see as a move towards ‘purpose’ in consumers’ choice of products. They aren’t just the anchor for Indonesian society but can serve as the foundation, inspiration, and differentiator in creating technology that will better our lives.”

On a more personal note, Alex ends by highlighting the shared sensibility he has with Indonesian culture: “There’s a genuineness about Indonesians that’s remarkable and makes it a very easy place to move to,” he relates, “While I’m ultimately a guest here, I can’t help but feel at home.”

Find more stories from our vault, here.
Check out open job positions by clicking below:

Read on to know how we customised and built new features in VerneMQ and the challenges we faced. 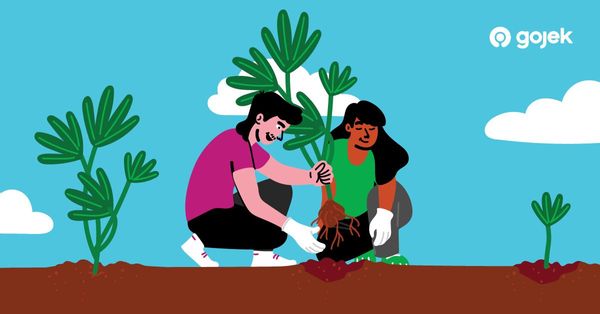 How we built GoGreener Tree Collective - a feature that allows customers to plant trees to absorb carbon footprint.